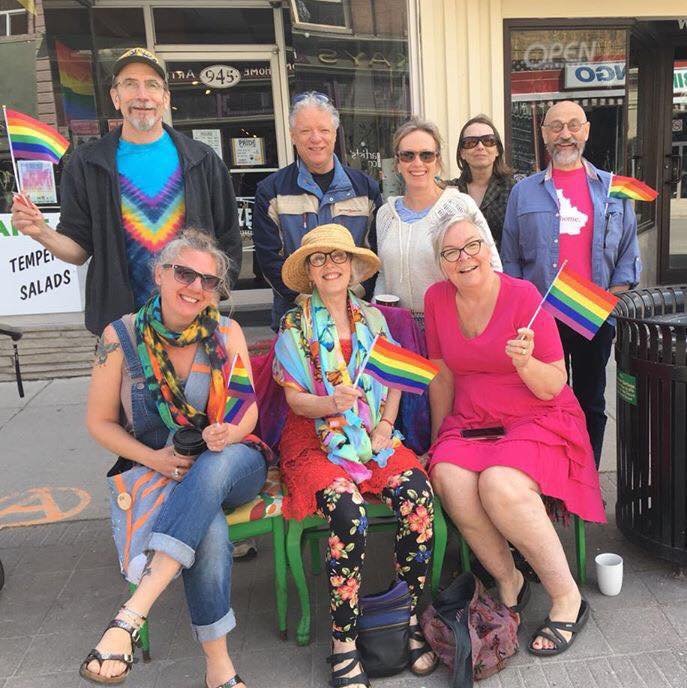 While it was worth the wait, the wait was still too long.

This is a rainbow we can all be proud of.

There have been mistakes made along the way. But often mistakes are clung to, perpetuated without reason. If one admits to being wrong now then one must admit to having been wrong all along. There are those whose conceit will not allow that to happen.

But what we've learned is that the sooner we accept being wrong, the quicker we get on with being right, and the faster our community heals and grows and strengthens.

On Sunday, June 10th, 2018, people started gathering at the parade marshalling area and soon realized how many they were, how strong they were. There were floats and banners, flags and fringe, glitter and glamour and glorious colours.
There was love everywhere.

Then the parade started down the street, heading south on Main. And they ran into hundreds more people lined up to cheer them on.

Along the sidewalks stood people dressed in more flags and frills and rainbow colours.

Everywhere there was a pervasive clamour of positivity, an invasive joy over the declaration of acceptance.

Everywhere there was the message of love and its power.

And then lines blurred ...

We knew there was a party to be attended in a parking lot at the end of the parade route. And we all thought we'd just meander down there when the parade had gone by.

But what happened was this, it became less clear who was a spectator and who was a parader. We saw friends going by who were clearly part of the parade, and then others who might have been, but ...

And then it became clear again ...

When you respect love, when you admire its participants, you became part of the human race.

And that's when we realized that we all belonged in the parade.

And so, we joined in.

Want to change how you receive these emails?
You can update your preferences or unsubscribe from this list.